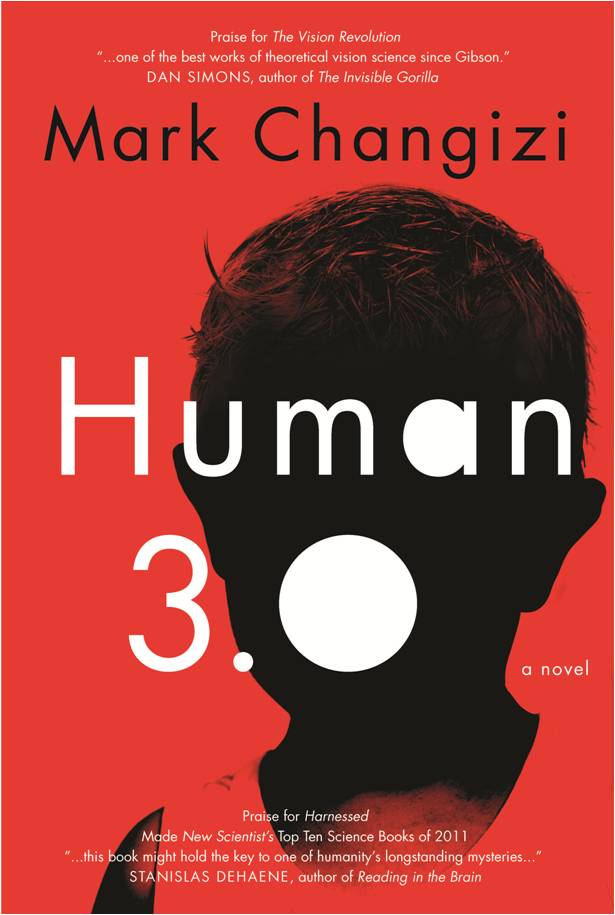 Written before the mass hysteria of 2020, Mark Changizi's first novel is a book for the 2020s. It's about human nature and the societal forces that arise out of it: Mass delusions, cultural evolution, infectious fear of the infectious, irrational social narratives, and the impacts of new technologies that bring us upward while simultaneously ripping us apart.

A must-read for those struggling to understand what it is to be human, when much of the world seems to have forgotten.

Mark Changizi, author of books such as VISION rEVOLUTION and HARNESSED, says we are currently Human 2.0. This work of fiction -- and accompanying essays -- illustrates how we might get to 3.0.

In a future where music is the wellspring of power for the Children that evolved to wield it, one man struggles with the realization that he, too, may be more than human.
Add to Cart
The forces that control and endanger us most of all aren't those from nature. Not hurricanes. Not pandemics. The dangers are from other people. And, more carefully, not from individuals so much as crowd effects that are an emergent consequence of masses of individuals.

It is the madness of crowds that is our greatest threat, something that the entire world now has first hand experience with since 2020, when fear of a pandemic induced mass hysteria and a consequent mass delusion where all risks became subservient to one astronomically over-exaggerated one, and interventions were presumed to work no matter how little evidence, how draconian their nature, or how harmful.

Written before the mass hysteria of 2020, Mark Changizi's first novel is a book for the 2020s. It's  about human nature and the societal forces that arise out of it: Mass delusions, cultural evolution, infectious fear of the infectious, irrational social narratives, and the impacts of new technologies that bring us upward while simultaneously ripping us apart.

A must-read for those struggling to understand what it is to be human, when much of the world seems to have forgotten.

The original motivation for the book was that, among science-fiction authors, Hollywood, technologists, and futurists who describe the future, there’s usually a presumption that we’ll have gone beyond our human constraints. Maybe we’ll be genetically enhanced, or perhaps we’ll stick computer implants in our heads – maybe we’ll have artificial intelligence that goes well beyond us, and be building artificial brains that put us to shame. Ray Kurzweil and his Singularity Institute push this sort of view strongly, and have an almost religious following.

Mark believed this is the wrong vision of the future, and many of his pieces “buzz kill” these ideas. See here and here.

But he came to realize that he also has a positive vision of where we’re headed. To understand what’s coming, we need to comprehend how we came to be the way we are today, so radically different from our Homo sapiens ancestors. We’re Human 2.0 today, and the step from (genetically practically identical) 1.0 to 2.0 came via nature-harnessing, namely via the ideas he put forth in (chapter 4 of) The Vision Revolution and in Harnessed. See this piece originally in Seed Magazine.

We should expect that Human 3.0 in the future will come via the cultural-evolution-for-the-brain mechanisms that have already given us literacy, language and the arts.

The first time he got concrete about this was in 2011 when he wrote a piece for Seed Magazine making this point – it was called “Human, version 3.0,” and it got a virus-load of attention.

​It was then that he realized a novel was in order, for he needed a venue to put forth a more specific illustration of what Human 3.0 might be like. Pointing to the current wavefront of technology and anticipating what they might become in a thousand years is, well, dodgy and lame. He needed to be able to paint a fuller picture of an example future, one where our descendants are seemingly radically beyond us, but are in actuality pulling from the same old wellspring of biological brilliance evolution already has endowed us with. …it’s just being harnessed in fantastically clever new ways.

While the book was written some years before the Covid pandemic of 2020, the story is about exactly the complex forces one must grasp to make sense of what has been happening since then. It's not enough to understand politics or society. It's not enough to grasp human psychology and human nature. One has to grasp how they interact to create complex design -- and sometimes frightening havoc -- at the level of the whole.
​
Returned from the earth-covered ruins of the ancient City at six years old, Tye Ilan entered society deeply and permanently handicapped – he lacked language. But something in the City had infected him, and now a new generation as well, and as the world grappled with these new beings, able to wield music to move the world around them, Tye found himself buffeted into the center of the struggle for what comes next, after humans.